Providing the most comprehensive

geosynthetic lines in the industry

Providing the most comprehensive geosynthetic lines in the industry 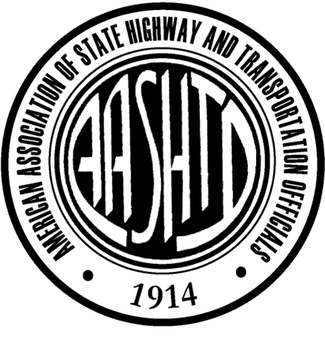 The American Association of State Highway and Transportation Officials is known as AASHTO. This organization was established by the State DOT's to work towards common goals. AASHTO consists of professionals from each of the states' highway and transportation departments. They are responsible for assigning route numbers for the U.S. route system. AASHTO's primary functions include: Advocating for transportation issues in Washington; facilitating information sharing between the State Dot's through meetings, workshops and the Internet; and developing globally recognized transportation engineering guides, standards and software.

One of those standards is AASHTO M288. AASHTO M288-21 is published within its two-volume "Standard Specifications for Transportation Materials and Methods of Sampling and Testing". US Fabrics offers geotextiles that satisfy AASHTO requirements. A US Fabrics' AASHTO selection guide is available in a link at the bottom of this page.

A Brief History of AASHTO

In the early 1980's the use of geotextiles in the United States was still relatively new and there were really not any accepted standard design methodologies for using geotextiles.

In 1982, the Committee on Materials of AASHTO, the American Road and Transportation Builders Association (ARTBA) and the Association of General Contractors (AGC) formed Joint Task Force 25 (TF 25) to review the suggested geotextile specifications being proposed by the Federal Highway Association (FHWA) Geotextile Manual. The task force was a diverse group of contractors, members of the geotextile industry and representatives of various state and federal transportation agencies.

In 1986 the task force approved five material specifications that included notations on installation procedures for the applications of paving, subsurface drainage, separation, erosion control and silt fencing. Eventually the five were merged into one single specification. This became known as M288-90. This specification was revisited and revised as the geotextile industry in the United States blossomed. The latest version is M288-21.

NTPEP was founded in 1994, from the popular Regional Testing Facilities (RTFs) organized by FHWA, SASHTO and NASTO. The basic mission of the program is to reduce duplication of effort by State DOT's and participating industry, for purposes of product prequalification.

AASHTO member departments (State DOT's) are recipients of NTPEP reports and each State DOT maintains prerogative to use the test data, as it suits their needs. As such, a State DOT requiring the AASHTO specification, may or may not also require the products be tested according to NTPEP guidelines.

While many State DOT's have adopted AASHTO M288 standards, many unfortunately combine them with their own specifications or require their own testing in addition to NTPEP.

AASHTO M288-21 “Table 1 Geotextile Strength Property Requirements” covers the required strength properties for six standard geotextile applications: Subsurface Drainage, Separation, Stabilization, Permanent Erosion Control, Sediment Control and Enhancement. However, AASHTO M288-21 is not a design guideline. It is the engineer's responsibility to choose a geotextile for the application that takes into consideration site-specific soil and water conditions. When site conditions are unknown, engineers can refer to AASHTO M288-21 Survivability Default Classes for guidance.

Table 1 lists the required strength properties for 4 classes or survivability: Class (4A) being the most robust and Class (3) being the least robust. Each class, with the exception of Class 1A, is then subdivided according to elongation. This offers a choice of non-woven geotextiles or woven geotextiles for each. Class 1A must be a woven. Additionally, Class 1A strength properties are actually listed in a separate table under “enhancement requirements.” Hydraulic properties are listed in separate tables with each application. The permittivity listed is a default value. AASHTO advises the permittivity must be greater than that of the soil. However, in most cases the soil permittivity is unknown or not listed in project documents.

Temporary Silt Fence, Paving Fabrics and Reinforced Soil application requirements are discussed in separate sections. Below is a link to a list of US Fabrics geotextiles that satisfy the AASHTO M288-21 specifications. This web page is provided as a source of basic information on AASHTO specifications. Products and specifications can change without notice. Always verify the geotextile meets the specification for the specific project you are bidding.

An Expert's Manual for Distributors
Download our free Distributor's Manual on Geosynthetics & Geotextiles. This 44 page manual is packed with useful tips and quick reference materials.